Facebook Twitter LinkedIn Tumblr Pinterest Reddit VKontakte Odnoklassniki Pocket
As part of plans to take youths off the streets and create employment opportunities for them, an ICT outfit, Tech-Hub has been unveiled in Ibadan, the capital city of Oyo State.
Leading the delegation of cream de la cream in the unveiling of multi million naira project was the Olubadan of Ibadan, Oba Saliu Adetunji, his wife, Alhaja Rasheedat.
The unveiling was held at the Tech-Hub office located at Onibonoje, Felele Area of Challenge, Ibadan.
Also in the delegation was High Chief Amidu Ajibade, Titan Rice Boss, Gbenga Eyiolawi (Aare Kebimapalu of Ibadanland) and the representative of Chairman, Ilaji Hotels and Resort, Engr. Dotun Sanusi, Mr. Demola Alabi among others.
The Olubadan of Ibadan, while speaking through the Palace spokesperson, Chief Adeola Oloko, commended the Chief Operating Officer of Tech-Hub, Mr. Emeka Smith for his initiative and thinking out of the box to create a productive engagement platform for youths in Ibadanland.
Oba Adetunji described him as a son of the Palace, who is endowed with bundle of ideas especially when it comes to ICT. The first class monarch charged other youths to emulate Emeka by chanel their efforts towards productive engagements.
According to the Olubadan, “Emeka is a bundle of ideas especially in ICT, and that is why we are here today. We are here to celebrate Emeka, he is a son of Olubadan Palace and we are trying to send him to the world to do exploits. That is why we are giving him support and encouragement, and we want everybody to emulate his example.
“In the Palace of Olubadan we did not discriminate against anybody, Ibadan is a cosmopolitan city, it is not only Nigerians that are here, we have people who are from other parts of the world in Ibadan, therefore, we want to encourage as many people as possible.
He has brought benefit to Ibadanland and we are going to enjoy it, so we want others to emulate what we are doing here today. We thank God for Emeka and we want to see many of him, not only in Ibadan but in Nigeria at large,” Oba Adetunji said.
Speaking at the event, Titan Farms’ boss, Gbenga Eyiolawi described Tech-Hub as a powerful initiative. That there is actually no big or small way to start, as one can start from least of all professional courses in ICT and rise through the ranks to become an expert.
In his words, “It’s a powerful initiative because in recent times most people have been moving away from ICT and delving into other illegal practices. So it is a good step in the right direction, trying to engage the youths ICT.
In his interaction with journalists, Emeka Smith, disclosed that Tech-Hub initiative is to prepare for ground breaking of his first Nigeria’s social media website (2geda.net) which was developed in 2015.
“It is an Information Technogy-based company with strong focus on bringing in fresh innovations into the sector.”
Smith explained that major priority of Tech Hub is to ensure excellent service delivery which cuts across ICT academy, web designing, graphics, internet advert, bulk SMS, blogging, web and social media account management.
By Toyin Adeola
ALSO READ  NBC, NIGCOMSAT Partner To Accelerate Digital Switch Over 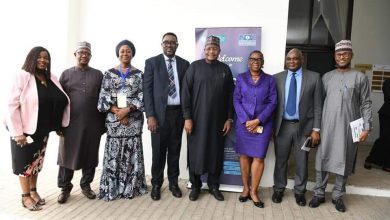