This was disclosed during a press briefing on Sunday, August 1, 2021, by the State Commissioner of Police, Hussaini Rabiu.

Rabiu told journalists that the command’s operatives carried out the rescue mission on Saturday, July 31.

According to the police commissioner, tactical operatives attached to ‘Operation Restore Peace’, who were deployed to Dansadau area of Maru Local Government Area for anti-banditry and kidnapping operations rescued a 15-year-old girl, Maryam Abdulkarim, who is from Wushishi Local Government Area of Niger State. 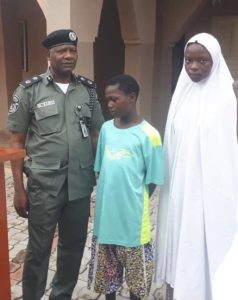 Also rescued by the operatives was Faruk Buhari, a 17-year-old boy from Wara in Kebbi State, from a nearby bush in Babbar Doka village of Dansadau Emirate.

“Investigation revealed that the rescued victims were among the abducted students of Federal Government College Yauri, Kebbi state.

“The victims were taken to the hospital for medical checks, and they have been debriefed at the Police Command Headquarters, Gusau.

BBNaija Season 6: Read What Saskay Wants To Use 3 Vibrators For