While delivering her speech, the club President, Rotarian Calista Akubuo said that her club was moved to carried out the project based on the level of what the club members saw when they visited the schools.

She said ” as you know that Education is one of the key things each children need. When we visited these schools, we discovered that the Uniform of most pupils here are tattered and need urgent replacement, so, our partnered with APON Foundation to put smiles in the faces of the pupils of the two schools.”

She advised parents to keep their children clean and neat always. 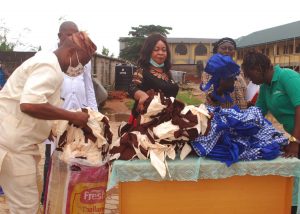 In his keynote address, the Founder, APON FOUNDATION, Rotarian Hon. Taiwo Abiodun Lasisi said he was inspired to formed the Foundation in 2019 to help the less privileged in the societies.

According to the Immediate Past Leader of the Legislative Arm, Egbe-Idimu Local Council Development Area “this program commenced in 2019 at Community Primary School and Unity Nursery and Primary School, Egbe with 90 free uniforms and free 500 exercise books to the pupils, we also gave free uniforms and exercise books to the pupils of Ore-ofe and Local Government Primary Schools in Egbe. We won’t stop here, we will still extend our gesture to other schools within our area, Lagos State and across the country by God’s grace.” He stated.

Alamu who was represented by the Authority Head of Social Mobilization Session, Mr. Adekanmi Alabi urged pupils and their parents to make good use of the unforms given to them wisely, appealing to the teachers to nurture the pupils very well.

The Schools Head Teachers, Mrs. Eunice Olufadeju of LG Primary School and Mrs. Oluremi Adebamjo of Community Nursery and Primary School appreciated the club President and members with APON Foundation for chosen their Schools for the free uniforms distribution, respectfully.