The duo, between 11th August and 13th September 2020, obtained the sum from one Alhaji Bukar Kime under the pretext of selling to him a purported plot of land measuring 50×50ft laying and situate at Pompomari Residential layout, Maiduguri which did not belong to them. 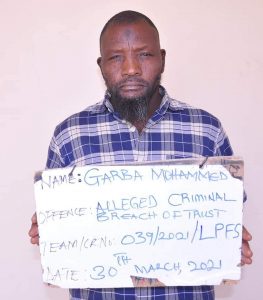 The offence is contrary to section 1(1) of the Advance Fee Fraud and Other Fraud Related Offences Act, 2006 and punishable under section 1(3) of the same Act.”

They pleaded ‘not guilty’ to the charge preferred against them.

Prosecution counsel, Haruna Abdulkadir asked the court for a trial date and to remand the defendants in a Correctional Facility.

Defence counsel, A. B Usman applied orally for the bail of his clients which was opposed by the prosecution and subsequently refused by the court.

Justice Kumaliya told the defence to apply formally for bail.

She adjourned the matter till September 23, 2021 for hearing and ordered that the defendants be remanded at the Correctional Centre.

In a related development, one Alhaji Garba Mohammed was on August 13, 2021 arraigned before Justice Umaru Fadawu of the Borno State High Court, Maiduguri on a one-count charge for misappropriating N3,922,000.00 (Three Million, Nine Hundred and Twenty Two Thousand Naira).

The defendant allegedly approached the nominal complainant and informed him that a contract for the supply of 450 bags of maize was awarded to him by the World Food Programme, and he needed money to finance the contract.

The complainant gave the sum needed to execute the contract to the defendant with the understanding that, both the capital invested and the interest will be returned within forty five days. But the defendant reneged the agreement.

The charge reads: “That you, Alhaji Garba Mohammed sometime in the year 2020 at Maiduguri, Borno State within the jurisdiction of this Honourable Court, while being entrusted with dominion over certain properties to wit: 450 bags of maize worth N3,922,000.00 (Three Million Nine Hundred and Twenty Two Thousand Naira) only supplied to you by one Saleh Abubakar for onward supply to World Food Programme (an NGO) and to remit the entire proceeds to the said Saleh Abubuakar, did dishonestly misappropriated the entire proceeds being the value of the said 450 bags of maize and thereby committed an offence contrary to and punishable under Sections 311 and 312 of the Penal Code Laws of Borno State Cap 102 Vol. 3 of 1994 respectively.”

The defendant pleaded ‘not guilty’ when the charge was read to him.

Counsel for the prosecution, Haruna Abdulkadir asked for a trial date to present his witnesses and urged the court to remand the defendant in a Correctional Centre.

Justice Fadawu adjourned the matter till September 14, 2021 for commencement of trial and ordered for the remand of the defendant at the Maiduguri Medium Custodial Centre.