The Minister of Interior, Ogbeni Rauf Aregbesola has said women empowerment would bring socio-economic development to the society, saying that where women were encouraged to thrive there would always be rapid development.

Aregbesola, made this assertion on Thursday, 26 August, 2021 at the 21st Regular National Council Meeting on Women Affairs in Uyo, Akwa Ibom State.

For Aregbesola, where women are encouraged to thrive, there is always rapid development. For this reason, “one of the greatest self-harm humanity has done to itself is to deliberately hold back more than half of its own species”.

The Minister in his speech titled “Better Women, Better Society” described women as God’s special gift to mankind, acknowledging the very vital role they play in human progress, particularly the perpetuation of the human race.

“Women are the stabilizing agent in the family. The major reason women are always very successful in any given assignment is unique to their feminine biology. Women demonstrate uncanny focus and commitment to child rearing. 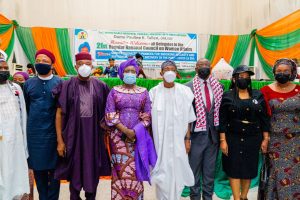 “It takes the whole of their spirit, soul and body. They tend to bring this to other assignments they are given in life. Our society is therefore the loser when we deny them the opportunity to replicate this unique gift”, Aregbesola noted.

The Minister expressed gladness with the significant progress women have achieved over the years through the National Council Meetings.

He however noted with dismay the persistent discrimination against women based on cultural, religious and traditional practices.

These are manifested in the negative and cruel stereotypes of women as sex objects and human reproduction machines.

“It is very painful that women still suffer discrimination and pay disparity in paid jobs as they are likely to receive less pay for doing the same job as men, even when they are demonstrably better.

“Women are less likely to access education, economic opportunities and suffered discrimination, if not outright exclusion in inheritance, than men.”, the Minister said.

He therefore advised women on the way forward. For him, women “need to help themselves in their own emancipation. In rearing their children, they should stop perpetuating the myth of male superiority. They should bring up their children, especially their sons, training them to respect women, avoid gender or any form of discrimination and violence against women. Mothers, in showing affection to their children, should demonstrate strength, and not weakness, so that they would not grow up believing women are weak and then treat them as such”, stating further that “affection should not translate to weakness”.

Aregbesola commended the Federal Ministry of Women Affairs for its unwavering commitment through advocacy and mainstreaming of women issues, to women development,urging it not to relent in its efforts at achieving the mandate of empowering women and gender equality in Nigeria.

The Minister, who used the occasion to inform of the special consideration given to women in the Ministry of Interior and the recruitment of officers into the four paramilitary agencies under it, especially the establishment of a special female squad in the Nigeria Security and Civil Defence Corps (NSCDC) to provide protection and security to schools in volatile areas for peace keeping within and outside the country.

He assured that the Ministry, through its services,will continue to do more as it relates to women.

The Minister of Women Affairs, Dame Pauline Tallen, while appreciating the government and people of Akwa Ibom State for the successful hosting of the council meeting, called on state Governors to initiate women empowerment projects and support gender equality initiatives by creating level playing grounds that provide women the opportunity to contribute to the development of the state by appointing more women into the state and local government administration.

The Governor of Akwa Ibom State, Mr. Udom Gabriel Emmanuel, who was represented by the Secretary to the State Government, Dr Emmanuel Ekuwem, assured of the State’s willingness to continue to partner with the Federal Government in eradicating all forms of violence against women and children, and promote the right of the girl child.

Protest Rocks Osun Over Sack Of Adeleke As Governor

Lagos: You Will Be Treated Fairly Under My Govt- Jandor Tells Igbo Traders