Monarchs in Alimosho Local Government Area of Lagos State, on Tuesday declared support for the Lead Visioner of Lagos4Lagos, Dr Abdul-Azeez Olajide Adediran popularly known as “Jandor” for governor of the state in 2023.

The monarchs led by the Onigando of Igando, Oba Lasisi Gbadamosi, expressed their support for Adediran when he led a delegation of the group on a courtesy call to them in Onigando’s palace.

Gbadamosi, who called for prayers for the success of the ambition, urged all the kings and High Chief ‘Baales” to support Jandor.

The monarch, noting that the “Aworis” has been lagging behind in every sphere in the state, urged the people to support Jandor.

He expressed joy that Jandor was the first to visit the traditional rulers in the area, adding that it was a sign that he was serious about his governorship ambition.”

“Awori is lagging behind in everything in the state. Jandor is the first person to come here. I know for a fact that more people will still come because when former governor Babatunde Fashola was contesting, he came here. There were 18 in number during his time. The 19th didn’t show up after we have mobilized the people to receive him. By the Grace of God, Jandor will be governor come 2023 according to earlier prayers said by Oba Meiran who is a traditionalist, pastor and an Imam, he will succeed”, said Gbadamosi.

He, however, pleaded with Jandor to be fair to the traditional rulers in the state after being sworn-in

In his address, Jandor said: “We want to take back what rightly belongs to us. We are asking and knocking that for the first time, let the governorship be given to the real indigene.

“Lagos4Lagos wants to restore what rightly belongs to us. Awori has 17 out of the 20 local governments in Lagos state. The process for the governorship started six years ago. We started this journey 6 years ago and has traversed all the local governments in the state. Our people in Epe and Ikorodu are with us. The traditional rulers have given their words to support our political aspiration. “Lagos4Lagos is broad-based. By 2023, all the people in Lagos will support whichever party that is putting Lagos indigene on the ballot.

“We are not talking about PDP or APC or APGA. That will not matter anymore. It’s the party that’s putting the indigene on the ballot that will get our support. We have the numerical strength in the state. Lagos4Lagos is broad-based. “

“Kabiyesi, It will get to a time that they will call you to talk to me to drop my ambition, I won’t listen Kabiyesi. We don’t need deputy or senatorial seats anymore. What we need now is executive power to turn our fortune around and we’ll get it in 2023 by God’s grace,” he said. 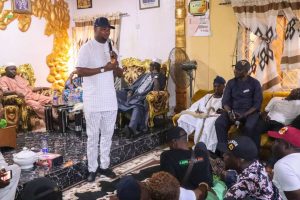 Jandor, later met with a crowd of Arewa community in Igando-Ikotun Local Council Development Area, LCDA, where he also sensitised them on the need to get their Personal Voter Card, PVC, in order to elect the candidates of their choice, saying, “ënough is enough of godfatherism in Lagos politics.”

Alimosho is a major local government in Lagos with the highest number of voters among all the 20 councils.

Politically, it is strategic in determining who wins as governor of the state during elections. The local government is commonly called ‘Tinubu’s Country’ by politicians due to its vintage advantage in the state’s electoral system.