Facebook Twitter LinkedIn Tumblr Pinterest Reddit VKontakte Odnoklassniki Pocket
The All Progressives Congress (APC) will on October 2nd, 2021 hold its state congresses to elect new leadership for the ruling party in the 36 states and the Federal Capital Territory (FCT). This follows the successful conclusion of the Ward and Local Government Congresses of the party. In Lagos State, the real battle is for the position of Women Leader. The incumbent, Hon Olajumoke Okoya-Thomas, has a mountain to climb for her to retain her position. At the last count, three formidable opponents have obtained nomination forms to slug it out with her.

NEWSBEATNG Political Correspondent, BASIT SAHEED, takes a look at the chances and challenges of the four aspirants.

Hon (Mrs) Yinka Laguda Babalola: Laguda-Babalola is a well-known grassroots politician who has been into partisan politics for more than three decades. She had been member of the progressive wing of Lagos politics since the beginning of this Fourth Republic and maintained her relevance among the power brokers as well as the rank and file of the progressive wing. Laguda-Babalola will be 63 years by October 16.

Ever since she has been in politics, Laguda-Babalola who is a resourceful entrepreneur and grandmother has played active roles in mobilising people for the party in all general elections in the state. Her mobilisation role has helped in deepening the influence and dominance of the APC in Agege Local Government where she plays her politics.

In 2019, Laguda-Babalola was deeply involved in the campaign activities that threw up Governor Babajide Sanwo-Olu. Her role in Sanwo-Olu’s emergence formed part of the reasons she was appointed in August 2020 into the Governing Council of the Lagos State Polytechnic by the governor, although, many analysts also believe that her closeness with the Speaker of the state House of Assembly, Rt (Hon) Mudashiru Obama, helped her in getting the appointment as it was believed the Speaker facilitated it.

Her closeness with the Speaker and being an appointee of the governor may be of great advantage in emerging as the next Lagos APC Women Leader as they might influence and mobilise for her across the state due to their positions and influence in the Governor’s Advisory Council (GAC), a group known for its influence in deciding who gets what, when and how in the state and the APC. Obasa and Sanwo-Olu may perceive her emergence as an advantage to achieving their political ambitions in 2023.

ALSO READ  It Is Igbo's Turn To Be President, Says Ayo Adebanjo

Another advantage is that Laguda-Babalola’s aspiration has the support of the leaders in Ikeja Division of the state’s political arrangement as members loyal to these leaders have begun to campaign for her among the delegates.

Major challenges: On the other hand, her aspiration may not get down well with some leaders of the party in her Senatorial district (Lagos West) who are strong and major backbone of the former deputy speaker, Hon. Bola Badmus-Olujobi, who is also eyeing the seat. Some of these Senatorial leaders and elders perceive her aspiration as Obasa’s aspiration and strategy to extend his grip on the party in the district.

Hon. Bola Badmus Olujobi: Hon. Badmus-Olujobi is a former deputy speaker of Lagos State House of Assembly. She was first elected into the House in 2003 after the sudden demise of the former Chief Whip of the House, the late Buraimoh Yussuf who represented Amuwo-Odofin Constituency 2. She became the deputy speaker after the impeachment of Hon. Funmilayo Tejusoho.

Little was heard about Badmus-Olujobi after leaving office as deputy speaker, until she resurfaced to be part of the party’s state executives a few years ago. The former deputy speaker enjoys the support of some of her colleagues in the party’s state executives who sees her as an energetic, young and vibrant woman who had learnt the ropes in parliament, politics and mass mobilisation. Despite not being in any elective position in the state, Badmus-Olujobi continued to extend her hands of welfarism to party members in her constituency (Amuwo-Odofin) and beyond.

She also has the backing of the major leaders and elders in the party and her senatorial district (Lagos West). A party chieftain said: “Badmus-Olujobi has always been seen as a possible replacement for Olajumoke Okoya-Thomas when it is time.” What is not known is whether the time has come or it is still in the nearest future.

Major challenges: Her aspiration may hit a brick wall if she is unable to galvanise support from other leaders of the two remaining senatorial districts, most especially, Lagos Central where the incumbent Women Leader comes from and seen as one of their daughters. Another challenge that might affect her aspiration is the yet-to-be-cleared alleged certificate forgery scandal that nearly ended her political career in the House of Assembly.

ALSO READ  Opinion: Who Is Afraid Of Asiwaju Bola Tinubu?

Now that she is vying for the position of State Women Leader, many observers argue that her close rivals may want to re-introduce the scandal to malign her ahead of the October 2nd election.

Barrister Omolara Abike Cudjoe-Alakija: Abike-Alakija is a member of the Governing Board, Ibile Oil and Gas Corporation. She was born on the 29th of December 1962 on Lagos Island to the family of late Mr. & Mrs. Cudjoe Abiodun Alakija. Abike-Alakija attended Sunnyfields Primary School, Surulere and Girls Secondary School Gbagada. She proceeded to Cranborne Chase School, Wiltshire, UK for her A-levels.

She attended the University of Buckingham and graduated with a BA in Politics, Economics, and Law. She returned for a second degree and received an LLB in Law. She was called to the bar in 1986. She is a legal practitioner with over three decades of post-bar experience. Molly as she is fondly called by everyone started out her career as a legal practitioner at Debo Akande and Co. She then proceeded to the banking sector; her banking career began in Financial Merchant Bank through Eko International Bank (now Polaris Bank) to Equitorial Trust Bank (now Sterling Bank). She started as a dealer, trading in the interbank money market, and grew to the position of Treasurer.

Abike-Alakija iis an avid entrepreneur, with over two decades’ experience in retail and merchandising and owns O’molly Ventures Ltd. She has also been involved in politics from her early days, through political support and engagements locally. She campaigns and sensitizes people on the importance of participating in politics and governance.

Major challenges: She is perceived as having little political knowledge as she has never held any elective position before. Her aspiration may also not enjoy the support of non-indigenes in APC who currently are jittery of the conscious mobilisation by the Lagos indigenes to occupy the state’s political landscape. It is also not clear if the governor will throw his weight behind her despite being from the same local government. Also, the incumbent Women leader’s influence in the district and the local government is still a major challenge to Abike-Alakija’s aspiration.

Hon. Jumoke Okoya-Thomas: Hon. Olajumoke Abidemi Okoya-Thomas was a member of the House of Representatives from 2003 to 2015. She represented Lagos Island I Federal Constituency on the platform of APC. Okoya-Thomas is the incumbent Lagos APC Women Leader, the position she occupied after Chief (Mrs.) Kemi Nelson was elected APC Southwest Women Leader some years ago.

The daughter of Chief Molade Okoya-Thomas, the Asoju Oba of Lagos, she was born on the 20th of January 1957. She has a diploma in Senior Management from Harvard University and a diploma in Sec. Admin from Burleigh College.

Her legislative interests were primarily on the Social Development of Women and Children. She chaired the Committee on Public Procurement and also was a member of the Committees on Banking & Currency, Diaspora, Niger Delta and Women in Parliament. She was also the former chairman of the House Committee on Prisons.

As a lawmaker, Okoya-Thomas sponsored a bill on the compulsory breast feeding of babies in 2013. The bill failed because her colleagues insisted it was an issue best left out of the public domain as “no woman has to be forced to breast feed her child” though they admitted the unarguable health benefits of breastfeeding. She seems to have the support of Who is Who in the party due to her political influence garnered during her time in the House of Representatives. Her strong tie with Lagos Central would be of advantage to her aspiration.

Major challenges: Some party leaders and elders from Lagos East are not comfortable with her style of leadership. They believe she is too elitist to sustain the tempo of women participation in the party in terms of coordination and carrying out their roles during campaign as election period draws nearer. Others, however, counter it, saying she has discharged herself meritoriously thus far. Another party chieftain, however, said the incumbent Women Leader would need to adjust in the way and manner she coordinates the women as campaign process is a rigorous electoral process for which everything must be put into. 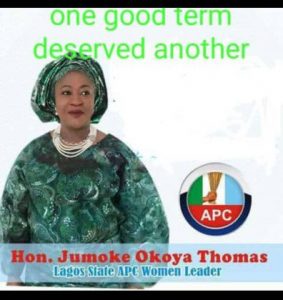 Sea Piracy On Nigeria's Waters Has Declined By 80%- NIMASA

Yoruba Language, Culture Must Not Be Allowed To Go Into Extinction- Ooni Ogunwusi