The Lead Visioner of Lagos4Lagos Movement, a group within the All Progressives Congress (APC) in Lagos, Olajide Adediran (Jandor), has enjoined eligible voters residing in the state to get their Personal Voter’s Card (PVC) ahead of the 2023 general elections.

Adediran said that it was only the best way to put the government of their choice in power.

He gave the advice while addressing his supporters at an interactive meeting in Ojo, held on Sunday.

Adediran commended the efforts of the members of the Movement for mobilising and sanitizing the people, saying that his entrance into the governorship race had positioned the Aworis as a major factor in the political equation of the state ahead of the 2023 gubernatorial election.

He expressed appreciation for the support from his local government, noting that the overwhelming support cut across ethnic, religious and political divides. 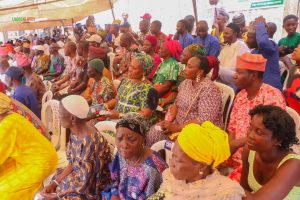 Describing his decision to liberate the state from impunity as “an idea whose time has come”, he explained that the power-brokers in the Lagos APC have suddenly become jittery because of his political structure.

Earlier, some of his supporters shared their experiences with past administrations in the state, lamenting that the entire Badagry Division had been unjustifiably neglected in the scheme of things in the state.
They added that the Division had never been considered worthy to rule the state either during the military or civil dispensation.

Expressing their desire to mobilize the entire Awori indigenes across the state in solidarity to the aspiration of one of their own, Jandor’s supporters expressed their happiness on the massive support garnered by him across ethnic, religious and party lines in the local government.