As part of his wide interaction with stakeholders ahead of 2023, the Lead Visioner, Lagos4Lagos Movement, a group within LagosAPC, Dr. Abdul-Azeez Olajide Adediran, will be attending town hall meetings with the USA Chapter of Diaspora4Jandor as the first in the series of scheduled tour to members across the globe.

Diaspora4Jandor is the umbrella title for the multitude of Lagos4Lagos members who live outside Nigeria particularly in the United Kingdom, Republic of Ireland, United States of America, Canada, United Arab Emirates and South Africa.

The town hall meetings are slated to hold in various cities in the US including Miami, Houston, Georgia and Maryland. 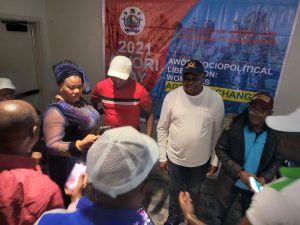 Flagging off the tour at an event organized by the Coalition of Aworis and Descendants in Diaspora (CANDID) in Miami, Florida, Jandor expressed his appreciation to the Diaspora community for their huge support and commitment to entrenching a government that will make “Lagos work for Lagos residents, irrespective of where they come from” .

Earlier, Jandor attended Coalition of Awori Descendants interactive session as chaired by the Grand Patron of the socio-political group, HRM Prof. Abdulkabir Adeyemi Obalanlege, the Olota of Ota Kingdom.
The President of the group, Hon. Saheed Olushi, in his address, described the governorship hopeful as a blessing and beacon of hope to the Awori Nation.
Olushi noted that the group has always benefited immensely from notable indigenes like Jandor to carry out its developmental and poverty alleviation projects.

Expressing the group’s support for the 2023 Guber ambition of the APC stalwart, Olushi expressed confidence in Jandor’s ability to turnaround the fortunes of Lagos to a true mega city in the realm of cities like New York, Dubai and London come 2023.