Tonto Dikeh’s ex-boyfriend, Prince Kpokpogri has allegedly been arrested and detained by the Nigerian Police Force.

Tonto’s friend and colleague, Doris Ogala hinted on the arrest via an Instagram post she shared. Though she never mentioned names, she however said he will be “sleeping with mosquito” till Wednesday October 20.

Journalist and former Presidential aide, Jackson Ude who then corroborated the arrest claim, mentioned Kpokpogri as the detainee.

He wrote;
“DIG Joseph Egbunike has ordered the arrest and detention of Prince Kpokpogiri who is asking Tonto Dikeh to return his Lexus SUV after both lovers parted ways. Tonto is allegedly using her relationship with the Police DIG to “teach Kpokpogiri a lesson” for messing with her.” 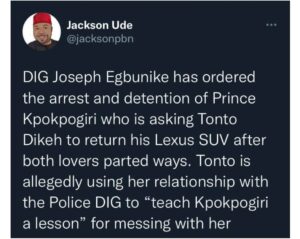 Multiple reports also claimed Kpokpogri traced his seized Lexus car to the hotel which Tonto lodged. He then punctured the tyres and backed another behind it to stop Tonto from moving the Lexus.

In reaction to this development, Tonto said “Prince Kpokpogri should pay back all the money he owes me and he must answer for putting a gun to my head (attempted murder).

“Threatening my life and the possession of over 30 illegally-recorded sex tapes. A 2017 refurbished Lexus isn’t the/my issue.

“I drive a Bentley, I have a Maybach on the way, I have a Gwagon, a Lexus, and a Mercedes van” she concluded.

Usman Alkali Baba directed the DIG in charge FCIIB to look into the matter. DIG Egbunike subsequently deployed the Commissioner of Police in Charge Administration at Force CID, CP Umar Sanda and some police operatives to the scene.

DIG Joseph Egbunike confirmed his arrest, “Yes, I called my CP Sanda Umar, CP Administration who despatched officers to arrest them. He (Kpokoogiri) became insulting and uncontrollable. I ordered his detention to enable him to calm down and regain his sanity. Besides, he has a pending petition against him which CP Sanda Umar is investigating.”