The trial of the leader of the proscribed Indigenous People of Biafra (IPOB), Nnamdi Kanu, resumed on a controversial note on Thursday with the Department of State Security (DSS) barring journalists and some court officials and lawyers from gaining access to the courtroom.

DSS officials had set up a barricade at the entrance of the Federal High Court where the case is to be heard and they prevented reporters and officials from gaining entry, resulting in angry scenes and arguments.

Nnamdi Kanu’s Special Counsel, Alloy Ejimakor while addressing journalists said the lawyers who accompanied him were denied access. He insisted that he will not enter the courtroom alone until the lawyers are allowed entry. 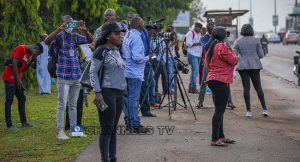 “They want to grab me and put me in the courtroom alone. I am not going into this courtroom alone. I am going in with this multitude of lawyers who have come to show solidarity. So I am standing outside here in protest. The lead counsel is on his way, these lawyers with me have come to show solidarity and support and they are being prevented from going into the court. This is wrong,” Ejimakor said.

Another lawyer on Kanu’s legal team, Godwin Uwazurike said they are at the court not just to ensure justice is served but to see the process as well.

“What do we tell Ohanaeze, that we were stopped at the gate? Can there be fair trial under this toxic atmosphere? No, there can be a fair trial.

“Justice must not just be done; it must be seen to have been done. That is why we are here,” he said.

Nnamdi Kanu is facing charges bordering on terrorism and treasonable felony charges brought against him by the Federal Government.

The Federal Government had filed seven amended charges bordering on treasonable felony and acts of terrorism against Kanu on Monday.

Attorney-General of the Federation and Minister of Justice, Abubakar Malami, filed the charges on behalf of the government.

Subsequently, the trial judge fixed today, October 21, for hearing and insisted that the trial will not go on in his absence.