The gale of crises rocking All Peoples Congress (APC) yesterday took a dramatic turn as dozens of armed policemen in several patrol vans took over the party’s National Secretariat in Abuja in the afternoon.

Everybody, including visitors, was frisked at the entrances of the secretariat located at Blantyre Street, Wuse 2 Abuja, which were was blocked at both ends with armed security men.

Vehicles were not spared, while the activities of policemen on duty were complemented by those of officers of the Department of State Service (DSS).

It was gathered that the deployment was to forestall a possible breakdown of law and order.

ThisNigeria learnt that some factions of the party led by a former senator, Kabiru Marafa, who has been having a running battle with the party’s current caretaker committee chairman, Mai Mala Buni, were planning to stage a protest at the secretariat.

Marafa had stridently called for the dissolution of the Buni-led committee, saying its tenure in office was alien to the party’s constitution.

He reportedly said that Buni, as the governor of Yobe State, could not be head of the Caretaker Extraordinary Convention Planning Committee (CECPC) of the APC.

He threatened that the combination of the two was no longer tenable, adding that the serving Yobe governor should choose between the governance of his state and the leadership of the ruling party.

But the committee, however, threatened that Marafa and his supporters could be expelled if their prompter did not toe the party’s line.

Following the warning to expel him by the APC national leadership over comments on the legitimacy of Mala Buni APC CECPC.

The deployment of security men, according to reports, was aimed at forestalling any breakdown of law and order.

He also threatened to ‘show’ Buni the way out, and in a dishonourable manner, adding that his front would not watch the party they contributed immensely to being destroyed by “over-ambitious self-centred and enemies of the party, and the country”.

Marafa also called on the national leadership of APC to respond to issues he had raised.

Referring to Section 17(4) of the APC constitution, the ex-senator said, “No officer in any organ of the party shall hold executive position office in government concurrently.

“Section 13.3(iv), which was relied upon to create the illegal body called CECPC, talked about the power of NEC to create committees.”

He said that the CECPC was illegal and alien to the constitution of the party.

“Expelling me from the party will only aggravate the problem. It will herald the beginning of the agitation; rule of law must be respected,” he said.

Marafa added, “The committee is illegal and alien to the constitution of the party. We are building everything on nothing. Rather than the expulsion threat, the committee or the chairman should respond to issues I raised.”

“What does our party constitution say, that renders Buni’s committee null and void? Section 17 (4) of the constitution of our beloved party says, ‘no officer in any organ of the party shall hold executive position office in government concurrently’. Article 20 states the only way the leadership of the party can evolve.

“Section 13.3(iv), which was relied upon to create the illegal body called CECPC, talked about the power of NEC to create committees.

“Mai Mala Buni should choose between Yobe or the APC. The combination of the two is no longer tenable. We will show him the way out dishonourably. We will not allow the party we contributed immensely to develop to be destroyed by over-ambitious self-centred and enemies of the party, and the country.

“This is the party we laboured, toiled, and laid the foundation for its success. We will not allow those who have little or no stake in the party to destroy it or to please certain individuals and achieve their selfish interests,” he said. 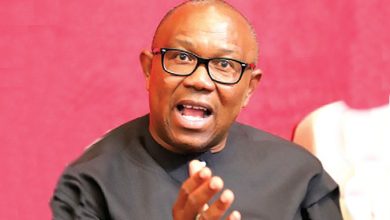