Her death was announced on Monday by the husband through his official social media handle, displaying the wife’s picture to inform the public of the sad development. 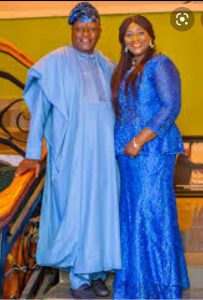 The former Commissioner’s wife died on Sunday, barely six months after celebrating her 48th birthday with her husband.

She was undergoing detoxification following successful chemotherapy managed by Evercare Hospital, Lekki, Lagos, before her health relapsed and she passed on in Osun state.

Fatty as she was fondly called by many close family friends and associates was born on May 19, 1973.

She attended Surulere Baptist Primary School and New Era Girls College, Surulere before proceeding to Obafemi Awolowo University, IIe-Ife where she had her Bachelor’s degree in English.

Fatty left behind three children and her husband.

The burial ceremony may be announced soon by family.