The Lagos Waste Management Authority (LAWMA) has commenced clearing the heap of refuse on an illegal dumpsite at Tin Can Island Port, on Apapa-Oshodi Expressway, targeted at ridding the axis of black spots.

No less than fifteen truck loads of refuse had been carted away to the Olusosun Landfill, since the operation began yesterday, at that location, turned to a dumpsite, through the activities of residents and traders operating an illegal market in the area.

This was made known in a statement issued by the Director of Public Affairs of LAWMA, Mrs Folashade Kadiri.

Quoting the Managing Director/CEO of LAWMA, Mr. Ibrahim Odumboni in the statement, the agency had mobilised men, trucks, pay-loaders, and other necessary materials, after overcoming a major challenge of vehicular access to the area, which had previously prevented evacuation intervention. 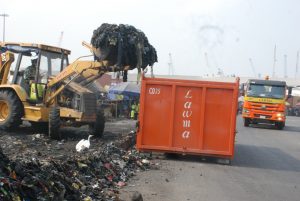 He further said the exercise would be a continuous one, to mitigate the challenge of indiscriminate dumping of refuse experienced in the Apapa axis and other parts of the state.

“LAWMA is totally committed to ensuring that every nook and cranny of the state, is rid of illegal dumping of waste, as we usher in the new year”, he stated.

He also disclosed that the LAWMA advocacy team was on ground to sensitise residents on the need to imbibe effective waste management as way of life.

Odumboni appealed to residents to shun the act of indiscriminate waste disposal, which had various attendant negative consequences, adding that the task of keeping the city clean is a collective responsibility.

Residents were also admonished to call LAWMA toll-free numbers: 07080601020 and 617, for inquiries on the PSP operators assigned to their locations.