The amount of foreign exchange that came into Nigeria in Q3 2021, skyrocketed by 64% to $30.18 billion compared to $18.4 billion recorded in the previous quarter.

A surge which is attributed to newly acquired federal government loans, recorded in the review period.

This is according to data from the Central Bank of Nigeria (CBN) statistical bulletin for Q3 2021.

Dollar inflow of $30.18 billion in the third quarter of 2021, represents the highest quarterly inflow recorded by Nigeria since Q1 2020, before the effect of the covid-19 pandemic. Similarly, on a year-on-year basis, the inflow increased by 14% compared to $26.47 billion recorded in the corresponding period of 2020.

During the period under review, the Nigerian government secured two external loans, which summed up to $7.34 billion, representing $3.34 billion IMF Special Drawing Rights (SDRs) in August and $4 billion Eurobond in September 2021.

Inflows through the Central Bank of Nigeria stood at $16.83 billion, which accounts for 55.8% of the total FX inflow in the review period.

On the other hand, inflows through autonomous sources, declined by 32% compared to $19.49 billion recorded in the corresponding period of the previous year. 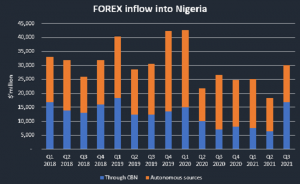 Moreso, the increase in the forex inflows from the CBN can be attributed to the significant increase recorded in flows through the Treasury Single Account (TSA) and Third Part Funds in September 2021.

Specifically, funds through the TSA and Third Party Funds grew by over 600% to $2.47 billion in September of the review year, while a sum of $3.2 billion was recorded in Q3 2021, accounting for 11% of the total inflows recorded in the quarter under review.

The Central Bank of Nigeria has continued to intervene in the official forex market, following the ban on the sale of FX to BDC operators in the country.

In the same vein, a total of $32 billion exchanged hands in the official Window, while the CBN supplied a sum of $13.16 million to the market between January and September 2021.

The increase in the amount of forex inflow in the county is good for the Nigerian economy as it will help boost liquidity in the system. In this case, the Central Bank has used the newly acquired loans to boost the country’s external reserve, whilst intervening in the market in order to stabilise the local currency.

Why We Will Miss Hon. Adetoun Adediran- Lagos Speaker

Against All Odds, Bitcoin Gains 40% In January