Private sector credit rose to a record high of N35.31 trillion as of November 2021, representing N5.16 trillion net new loans between January and November 2021. This is according to data from the Central Bank of Nigeria (CBN) money and credit statistics.

Bank credit to private sector in Nigeria increased by 17% compared to N30.2 trillion recorded as of December 2020. Bank credit in Nigeria has skyrocketed in recent times, owing to a chain of CBN policies and increased activities in the Nigerian lending space, especially with fintechs.

On a month-on-month basis, the private sector credit increased by N694.2 billion in November 2021, moving from N34.62 trillion recorded as of October 2021 to N35.3 trillion in the review period.

The Central Bank voted through the year to keep the benchmark monetary rate (MPR) at 11.5%, which determines the rate of acquiring loans from banks. A move, which was made in order to help stimulate real growth and recovery from the economic recession recorded in 2020 by improving credit to the real sector.

The apex bank pointed out during the monetary policy meeting in November that the stance to keep the rate has supported growth recovery and is poised to improve price stability that is conducive for sustainable growth.

The report from the Central Bank also shows that currency in circulation also rose by 8% in the review period to N3.15 trillion in November 2021 from N2.91 billion as of the end of the previous year. 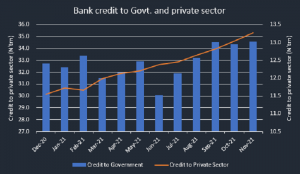 Also, credit to government increased by 5% to N13.03 trillion as of November 2021 from N12.4 trillion recorded as of the end of the previous year, further showing improved credit facility to the economy.

NewsBeatng investigation reveals that despite the increase in the amount of bank credit to the economy, lending rates still remain on the high, with the maximum lending rate as of November 2021 rising to 27.26% compared to 27.1% recorded in the previous month.

The increase in the rates and credit supply implies that Nigerian corporations are still open to more borrowings despite the high lending rates.

NewsBeatng reports that the central bank has held unto its monetary stance to boost credit by holding the MPR rate at 11.5% in order to spur growth in the economy and ensure the stability of prices in the country, having endured significant surge in inflation rate in 2020 through to 2021.

In its final monetary policy committee meeting for the year in November 2021, the CBN highlighted that its policy had started to yield positive results given the improvement in Nigeria’s GDP (+4.03% in Q3 2021) and moderation in inflation rate (15.4% in November 2021).

However, ss much as the committee continue to encourage improved credit supply to the sector by banks, it also urged the apex bank to sustain its tight prudential regime to bring the Non-Performing Loan (NPL) ratio below the 5% prudential benchmark.