Facebook Twitter LinkedIn Tumblr Pinterest Reddit VKontakte Odnoklassniki Pocket
National President of the National Union Of Road Transport Workers (NURTW), Alhaji Tajudeen Baruwa, has appointed Alhaji Azeez Abiola, known as Istijabah, as the Caretaker Committee Chairman of Lagos State, Tricycle Owners And Operators Association Of Nigeria TOOAN of NURTW.
This was revealed in a letter of confirmation signed and approved by the National Secretariat of the Association in Abuja on Wednesday, February 9, 2022.
Istijabah in his new capacity as Caretaker Chairman of the Association in Lagos state is expected to manage the activities of the Tricycle (Keke Marwa) throughout Lagos State.
He has therefore been given the nod to hit the ground running immediately to reposition the glory of the association in the state.
The appointment and immediate confirmation was witnessed by the National Executive Council of NURTW as well as  Lagos state NURTW executive council.
Alhaji Istijabah, until his new elevation as State Chairman, was the Zonal Chairman, Lagos State TOOAN of NURTW, Zone C. He also doubles as a Trustee NURTW Lagos State Council. 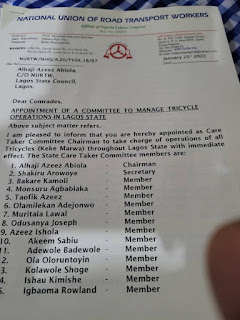 The new TOOAN Chairman is therefore expected to lead a 17-member committee who are also mandated to offer him all the needed support to steer the wheel of the association in Lagos State.
Names of the 17- member committee are Shakiru Arowoye …. Secretary, Bakare Kamoli ; Monsuru Agbabiaka, Taofik Azeez, Olamilekan Adejonwo, Muritala Lawal, Odusanya Joseph who are members of the committee.
Other members are Azeez Ishola, Akeem Sabiu, Adewole Badewole, Ola Oloruntoyin, Kolawole Shoge, Ishau Kimishe, Igbauma Rowland, Shola Banmodu, Oluwaseyifunmi Joseph and Ade Adelagun.
This has therefore put to rest controversy, over the leadership of the association in the state. Consequently, the National President has requested for maximum support for Istijabah in the state.
The statement of the National Council therefore is that by the creation of the committee, the burden on the Lagos State Council with over two hundred branches under its jurisdiction will be reduced, so that they can attend to the myriads of problems facing  other members of the union, expectedly those driving different types of vehicles.
The statement said, “It is also our belief that the appointment of a committee to manage and control the affairs of TOOAN under Lagos State NURTW will go a long way  towards reducing the rivalry created among union officials/ members which at times lead to breach of peace as evidenced by the recent crisis that erupted in Lagos Island last week.
“Please note that you are appointed purely on merit, cognizance of your exemplary and outstanding performance in the area of tricycle operations.
“We are confident that you will bring your wealth of experience to bear in the discharge of this assignment,” the statement revealed. 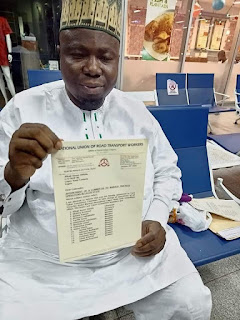 The National Council has therefore charged the Lagos State Council of the union, under the leadership of Alh. Musiliu Akinsanya, Lagos State Chairman NURTW, to assist and cooperate with members of the Care Taker Committee so as to ensure the attainment of the Union’s objectives.
Alhaji Abiola Azeez( Istijabah) the new Caretaker Chairman, is a Godfearing man, blessed with extreme humility, and wealthy with a large heart for the disadvantaged and dis-empowered, thousands of whom he has empowered.
He has  at many occasions, as the Zonal Chairman of the Association, displayed the philanthropic potentials that made him loved among the Union, when he  purchased over 5000 tricycles for members under his Zone.
He recently released another batch of brand new tricycles to the  members across Nigeria especially those in Zone C.
ALSO READ  PHOTO NEWS: FG Evacuates 542 Stranded Nigerians From UAE

UN Offers $1.1b Humanitarian Assistance To 8.4m Nigerians In Northeast