Leaders of the All Progressives Congress (APC) in Ijesaland have sounded a note of warning to those instigating campaign of calumny against Minister of Interior, Rauf Àregbesola that nothing must happen to him.

Speaking with newsmen in Ilesa, the APC leaders noted that the political rise and exploits, of Aregbesola has not gone down well with some people in Lagos, hence their determination to pull him down at all cost

The APC leaders led by Alhaji Azeez Adesiji, a former Chairman of Ilesa West Local Government, the Ijesaland APC leaders, who reaffirmed their allegiance and support for Aregbesola, said they shall hold these people responsible if anything happens to Aregbesola. 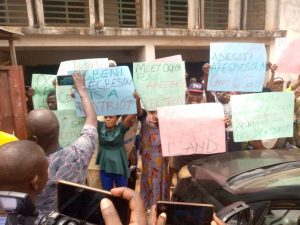 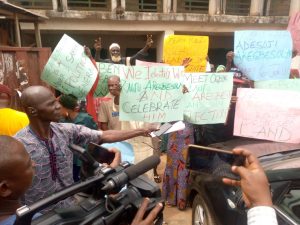 “We are ready to follow him to war and fight on his behalf against any foe. We shall use everything at our disposal to defend one (or any) of our own in the face of any diabolical attack.”

According to them, “Aregbesola’s political rise and exploits, no doubt has not gone down well with some people in Lagos who are sworn to pull him down. From time immemorial, they have been sowing seeds of discord between him and Asiwaju but their efforts hitherto have been fruitless.

“Unfortunately, however, they have now succeeded in poisoning the mind of Asiwaju against him, leading to the crisis of confidence between them. It is our hope and prayer that they will iron out their differences and become a formidable team again.

“These enemies within have now used the crisis in Osun to maximum advantage. Let us ask them: where were they when Rauf was making enemies on behalf of Asiwaju and taking bullets for him? They have been lurking in the shadows, of no use to themselves, Asiwaju and the party. They falsely think that Rauf’s loss will be their gain. They are grossly mistaken.

“Their campaign of calumny against Rauf will fail and they will eat the bread of shame and drink the wine of disgrace. Aregbesola is God’s anointed.

They, however, expressed their hope to see the settlement of the differences between the National Leader of the party, Asiwaju Bola Tinubu and Aregbesola.

The APC leaders also condemned those who carried coffin purported political death of Aregbesola in Alimosho local government, describing the conduct of the youths as uncalled for and political hatred carried too far.

They later carried placards with different inscriptions like: Aregbesola will reach the promise land, God will continue to protect Aregbesola, Ogbeni is a patriot, Aregbesola is a mover and shaker of politics, Adesoji Aregbesola carry go joor, We identify with Rafiu Aregbesola and celebrate him.