The governor, who performed the presentation on Friday afternoon at the historic Mapo Hall, Ibadan, equally urged the new Olubadan to be father to all.

Westernpost reports that other prominent Nigerians, especially sons and daughters of Ibadanland; politicians, captains of industries, and a flock of tourists and stakeholders — home and abroad, graced the occasion.

Many associations, in different colorful outfits, were seen within and outside the Mapo Hall premises — venue of the event, dancing to the indigenous Yorùbá music of Ibadan origin.

No fewer than four popular Yorùbá musicians including an Ibadan-based Fuji maestro, have set their stages to entertain dignitaries and well-wishers at the kingly occasion. 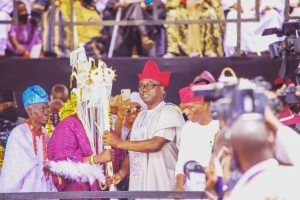 A visit to the Ali-Iwo Compound, where the new Olubadan hails from, shows that ceremonial activities are afoot, as choral groups are seen singing in praises of the Ali-Iwo family.

Traditional drummers and native praise-singers, with scores of sight-seers, were also sighted at different spots on the Oje-Beere-Oja-Oba axis.

Meanwhile, there wss heavy deployment of security operatives to some strategic locations within the metropolis, especially the roads leading to the venue of the event.

It was observed that there was presence of teams of Nigerian security agencies, including the NSCDC, Operation Burst and Amotekun personnel, deployed to prevent a breakdown of law and order.

Major roads leading to Mapo Hall were blocked, while commuters trekked long distances in getting to their destination and venue of the ceremony.

Also observed was the presence of traditional worshipers a few metres away from the venue chanting, dancing and ecstatic about the auspicious ceremony.

A lawmaker representing Ibadan North 2 Constituency in the state Assembly, Hon. Babajide Gabriel described the development as the best that has ever happened in the history of Ibadan land .

Babajide urged the new Olubadan to observe and rule the people with the tradition of Ibadan land in order to move the city to greater height.

“The coronation of His Imperial Majesty Oba Lekan Balogun is one of the best so far in the state with high profile monarchs and many eminent personalities in attendance from all works of life,” he said..

He prayed God Almighty will grant the monarch peaceful reign during his tenure.