The Lagos State Government has shut down the Apongbon bridge and gave 48 hours notice to shop owners and squatters occupying the space under the infrastructure to vacate the axis, following the inferno that wrecked shops and the market under the bridge.

It said that anyone found trading and using under the bridge as space for storage of goods would be arrested and prosecuted in accordance with the state laws.

It gave the order on Wednesday after the Lagos State Fire Service and other emergency responders contained the fire that started at about 2 am from a container and spread to other parts of the market, to its source in order to put it out completely.

The orders were announced by the Special Adviser to the Governor on Central Business Districts (CBD), Gbenga Oyerinde, and Permanent Secretary, Lagos State Emergency Management Authority (LASEMA) Dr. Femi Oke-Osanyintolu, while reacting to the unfortunate inferno that crippled commercial activities around the axis.

Oke-Osanyintolu said: “The bridge has also been shut pending when integrity and Environmental Impact Assessment, EIA, is conducted on the bridge to determine the level of public safety”. 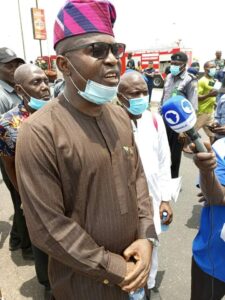 On the quit notice, Oyerinde, who described owners of containers and makeshift shops affected by the fire incident under the bridge as illegal squatters, stated that they were not expected to trade under the road infrastructure.

The Special Adviser, while commending the prompt response of the men of the Lagos State Fire Services for their quick response in curtailing the fire incident, said containers and makeshift shops would no longer be allowed at the section affected by the fire under the bridge henceforth warning that anyone who flouts the directive to stay away from using under the bridge for storage or trading would be made to face the wrath of the law.

While decrying traders’ non-adherence to safety guidelines despite several meetings held with leaders of the market associations and CDAs on the need to consider safety as paramount, the CBD boss noted that the fire incident under the bridge may become endemic if steps were not taken to forestall future occurrence.

Addressing traders using the area to trade illegally, the Special Adviser and other State Officials counsel them on the need to remove structures placed or erected under the burnt section of the bridge which could hamper rescue operations by operatives of LASEMA curtailing the spread of the fire incident to other parts of the area.

He noted that the cause of the recent fire outbreak which has not been fully ascertained may be as a result of the storage of explosive and combustive materials stored in some of the containers located under the bridge.