The National Chairman of Action Democratic Party (ADP), Engr. Yabagi Yusuf-Sani, has described the government of President Muhammadu Buhari as an unmitigated disaster and a woeful failure in the provision of security and safety of the people.

Yusuf-Sani said this at a press conference held in Lagos on the terror attacks on the Abuja-Kaduna bound train.

The ADP Chairman said the unfortunate incident had again pungently thrown up questions about the competence and attitude of the Buhari-led APC federal government over the security of the lives and property of citizens, adding ” a casual chronicle of similar happenings in the recent past, especially, in the notorious axis where terrorism hold sway in the North of the country, will graphically reveal that the latest phenomenon of calamity visited on Nigerians last Monday, is merely another portrayal of the high level of the lackluster disposition, corruption, debauchery and myopia of the officials of this government put in charge of our national assets and our security.

” For instance, the bombardment and assault on the train last Monday occurred barely one week after a brazen daylight invasion of the Kaduna International airport by another horde of highly armed terrorists. Two people were officially reported killed and flight operations disrupted as a result.

” Among the many puzzles arising from the attack on the Kaduna Airport include: How was it possible for the over two hundred heavily armed terrorists who rode on motor bikes, to have been able to gain access to the vicinity of the airport and to the tarmac, with ease? The invaders also amazingly, operated and disappeared into the thin air without any arrest or casualties on their part! The only plausible and logical explanation is that, the airport had been left without any level of security surveillance equipment and was also, bereft of enough, if there were any at all, security personnel on ground”.

ALSO READ  We Are Committed To A Clean Environment, Says LAWMA Boss

He said that the terrorists attack on the Abuja-Kaduna train was a similar manifestation of the decadence and abysmal level of degeneration in the nation’s security architecture, saying ” The attack on the Abuja-Kaduna train came against the background of two previous incidents, again, all happening within a period one year. It began with an incident of the throwing of boulders of heavy stones and metals which shattered some windows of a moving train. That was followed a few months later by another incident, when the miscreants used dynamites that resulted in the damage of a portion of the rail track. A more security conscious government should have interpreted those two incidents as dress rehearsals and accordingly adopted proactive measures”. 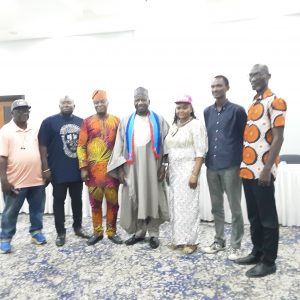 Yusuf-Sani advocated for the reinvention of the nation’s security architecture by way of boosting the shortage of manpower in the security agencies, calling for drastic, radical measures to redress the challenge of paucity of sophisticated modern armament and gadgets in the arsenal of the nation’s Armed Forces.

” We have also severally suggested honest commitment to the crucial issue of boosting the morale of members of the security agencies by enhancing their welfare and conditions of service”, said Yusuf-Sani.

” The Action Democratic Party is calling on President Muhammadu Buhari to for once, demonstrate dynamic leadership, care and sensitivity to the feelings of citizens by ensuring that heads are made to roll. Those that must be held accountable include, the security Chiefs, who have manifested gross incompetence, lack of vision, diligence and dereliction of duty and the Minister of Transportation whose incapacities have severally manifested in the different departments under his purview. Of course, these people., should be made to face the music if, as it would have been the case in civilized climes, they lack on their own, the honour and nobility of mind to do the needful”, said the ADP Chairman.

Ogun: Mild Drama As One Of Seven Contestants For Owu Stool Lies About State of Origin