The presidential candidate of the Peoples Democratic Party (PDP), Alhaji Atiku Abubakar, has said that he would use the proceed from the sale of Kaduna and Warri refineries to empower the Nigerian youths.

Atiku, who made this known at the party’s presidential campaign rally held on Monday at the Tafawa Balewa Square (TBS), Lagos state, said that he would use $10billion for youth empowerment.

The PDP presidential candidate promised to restructure the country by devolving more powers to the local governments so that the people would hold them responsible.

He alleged the ruling All Progressives Congress (APC) of misleading Nigerians on who developed Lagos, saying that second and third mainland bridges including Agege motor road were built by the federal government before the existence of the APC government.

” The federal government in existence before 1999 built the second and third Mainland bridges, Agege motor road and the roads linking Island and mainland. APC has been lying and misleading Nigerians that they built Lagos.

” I want to tell you to rescue Lagos from a family government to people’s government by voting Jandor as your governor in next election”, said Atiku.

Addressing the people earlier, the governorship candidate of the party in the state, Dr Abdul-Azeez Olajide Adediran (Jandor), said it is time to recover Nigeria so as to rescue Lagos by voting Atiku.

Adediran said that unemployment rate increased in the state under the watch of governor Babajide Sanwo-Olu, saying that the investment made by the state government into the Lagos Employment Trust Fund (LETF) was unproductive. 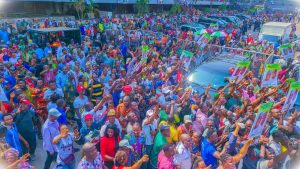 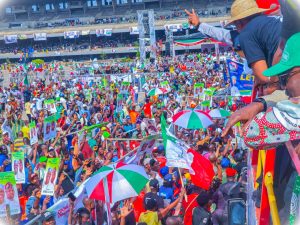 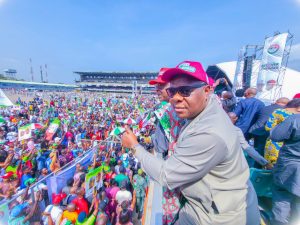 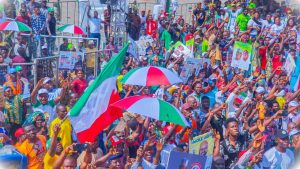 ” Those who are governing Lagos now have never been an employer of Labour in their life, so they will not know how to create employment opportunities for our people. Myself and my Deputy, Funke are employers of Labour. We have been enterprenuers since our 30s, so we have clear understanding of how to create opportunities for the youths and our women. I want to assure you that our government will end Tinubu’s reign in Lagos”, said Adediran.

Meanwhile, the National Chairman of the party, Dr. Iyorchia Ayu, said that the PDP would recover the country for the people to enjoy a better life, charging Lagosians to rescue Lagos by voting the party’s governorship candidate.

Ayu urged the people to be determined to kick out the APC from power by voting the PDP across board in 2023.

Part of those who spoke were the governor of Akwa Ibom state, Udom Emmanuel, former speaker of House of Representatives, Rt (Hon) Yakubu Dogara and the Wife of the presidential candidate, Mrs Titi Atiku.

Sterling Bank Refreshes Romance With The Arts At Ake Festival