The Spokesman of the All Progressives Congress (APC) Presidential Campaign Council, Festus Keyamo, has sued the Presidential Candidate of the People’s Democratic Party (PDP), Atiku Abubakar, for corruption.

Keyamo on 16th January issued a 72-hour ultimatum to the Economic and Financial Crimes Commission (EFCC), the Independent Corrupt Practices and other related Offences Commission (ICPC), and the Conduct of Conduct Bureau (CCB), to arrest the former Vice President.

He wanted Atiku arrested for money laundering, breach of the Code of Conduct Act, conspiracy, and criminal breach of trust and misappropriation.

Serving Minister of State for Labour and Employment, Keyamo anchored his suit on the allegations made by Michael Achimugu, who claimed to be a former aide to the PDP candidate, who made social media posts alleging that Atiku employed Special Purpose Vehicles (SPVs) to commit financial fraud while in office.

In the videos released some weeks ago, Achimugu made several allegations against the PDP presidential candidate.

He had claimed that between 1999 and 2007 when Atiku was Vice President, he colluded with ex-President Olusegun Obasanjo to fleece the country using what he termed “Special Purpose Vehicles” (SPVs).

Today, Keyamo filed his suit at the Federal High Court in Abuja seeking an order compelling Atiku to be investigated by EFCC, ICPC, and CCB.

Portable Rants As TG Omori Billed Him $50,000 For Video Shoot 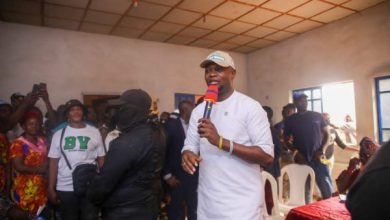