President Muhammadu Buhari on Monday, unveiled the Lekki Deep Sea Port, the largest in Nigeria and in Sub-Saharan Africa.

He equally unveiled the Rice Mill in Imota, the fourth largest in the world and largest in Africa.

Buhari, who landed at exactly 3.33pm at the Presidential wing of the Murtala Muhammed International Airport, Ikeja, was received by Governor Babajide Sanwo-Olu, Deputy Governor Obafemi Hamzat and some members of the State Executive Council. 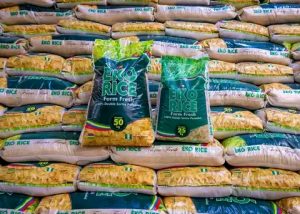 Buhari did not speak before and after unveiling the project, but took a brief tour of facilities in the project.

Governor Sanwo-Olu described the Sea Port as a total combination of the efforts of the Federal Government, Lagos State government and the private sector, saying the project was started and completed during the administration of Buhari. He added that the size of vessels that would berth at the port could be up to four times the size of vessels that currently berth at the Tin Can and Apapa Ports.

Sanwo-Olu said the project would also provide thousands of direct and indirect jobs to Lagosians. He thanked all who made the project a reality.

“So, it is a massive infrastructure and we are excited that something fresh has been impacted into this country, and it is going to generate thousands and thousands jobs directly and hundreds of thousands of jobs indirectly in the entire ecosystem. This is your own project and we are excited.”

President Buhari also opened the Imota Rice Mill, considered the biggest of its kind in Africa and fourth largest in the world.

The mill is a 2 xX IGMTPH standing on an area of 8.5Ha land, with an annual paddy requirement of over 240,000MT to produce 32  metric tonnes per hour, 2.5 million bags of 50kg rice per annum. The mill will generate about 1,500 direct jobs and 250,000 indirect jobs to Lagosians. The final product is called ‘Eko Rice’.

President Buhari, who described the project facility as ‘so big’, hailed the Lagos State government for taking the bold step to become self-sufficient in food production.

He toured the facility, saw the rice pyramids and also watched the last part of the bagging process, which is the sealing.

Sanwo-Olu, who said the president was delighted with the projects, said: “The president is really so delighted to be here to open the largest rice mill in the entire Sub-Saharan Africa and one of the largest in the world. The Lagos rice mill here in Imota has been done because of the agricultural revolution of Mr President who, when at the beginning of his administration, said Nigerian should grow what they eat and eat what they grow. We are happy that Lagos is the testament for that.

“Lagos is ready to support the rice revolution and food revolution in Nigeria. It will create close to 250,000 direct or indirect jobs. We want to thank the Imota and Ikorodu community, and  everyone for waiting patiently. Mr President is indeed excited that we have achieved another first in Nigeria and Sub-Saharan Africa. Thank you all.”

Sanwo-Olu also restated his administration’s commitment to further bring about socio-economic and infrastructural development to the state, while ensuring Lagosians enjoy the dividends of democracy.

The Oniru of Iruland, Oba Omogbolahan Lawal, a former Commissioner for Agriculture in the state, said he is happy to witness the mill’s opening.

He said: “I am one of the happiest people here today. I remember vividly in 2011/2012, when the Eko Rice started, it was  a 2.5metric tonne capacity, and I also remembered we were able to create jobs through the rice value chain.

“This is the biggest in Africa, and I must thank the Federal Government for coming up with the initiative of banning rice importation. This project has many advantages, ranging from employment opportunities, revenue generation, economic development, among others.”

Ranodu of Imota Oba Mudashiru Bakare-Agoro expressed his delight that the project came to being in his lifetime and reign.

“It is worthy of celebration for me. I am 30 years on the throne, and I am celebrating that with this project opening. It’s a landmark achievement given to Imota by God Almighty through some people. This project has brought all the factors of production to Imota, and when these are present in any area, it would engender both economic and commercial development. The multiplier economic effect of this mill is unquantifiable, and we are grateful. I’m praying to God that we all live to witness the development. My message to my people is that we are overjoyed and we should protect this well.”